September 29th, 2010: This day can be expected to become a historical date for the breed Deutsch-Langhaar. It was on this day – while preparations for the annual Schorlemer HZP the next day were underway - that six countries adopted and signed the by-laws for a new international alliance. Anything but a slow process considering that the initial draft of the by-laws had been written as recent as February 27th of the same year.

The German Deutsch-Langhaar Association is due much recognition for being instrumental in the formation of  this international coalition of member clubs from countries where they oversee this traditional “Forest Hunting Dog“, as the Deutsch-Langhaar dog is also known. It was a natural and suitable role for the German breed club in the breed’s native country to be instrumental in this endeavor. After all, it is Germany where the breed, its breeding, training, handling and overall presence are cultivated.

Early efforts to go global began in 1969 when an international VGP was introduced and held annually from this year forth. Apart from few exceptions, participating international teams with 4 dogs each usually came from no further than Germany, Austria and the Czech Republic. Wilhelm Houzer, Germany, Josef Dettelbacher, Austria, and Bohumnil Koubelka, Czech Republic, initiated this performance competition for handlers from these three countries. Some Langhaar friends will still remember the first of such VGPs in Pöchlarn, lower Austria. It was suspense to the very end when “Illa vom Feuersang“ finished as the highest scoring dog with just one point ahead of her male litter mate “Infant”. Similarly, about half of the other test participants remained high scoring dogs and potential winners through most of the test subjects. In fact, for decades – even as far back as the era between WWI and WWII, Germany, Austria and the Czech Republic have engaged in an active exchange regarding breed and breeding.

An increasing demand for the Deutsch-Langhaar dog, particularly in Northern Europe and North America, prompted some of our high-ranking members to set the goal of an international association embracing all DL breed clubs.

In July 2009, the German Association’s Chairman, Gerwin Günter, who has been in this position since 1994, and his supporters, Dr. Lutz Frank, who is familiar to all hunting dog breed advocates as the long-time JGHV business manager, and the spokesman of the Stud Book Commission, Eike Behrens, invited the chairmen of DL breed clubs from those countries, which are known to breed the DL according to FCI standards, to an informal meeting.

Gerwin Günter, Dr. Frank Lutz and Eike Behrens are active DL handlers and breeders. Dogs from their respective kennels, “vom Buchwald (Günter), “Frankundfrei” (Dr. Frank – his kennel has been in existence since the 1940’s!) and “vom Stellfelde” (Behrens) have been influential to the breed. Their dogs, through outstanding test and performance results over the years, have become known to handlers of other breeds.

The meeting took place in Hannover on August 29th, 2009. The venue was suitably chosen as it was in this town exactly 130 years ago that the DL breed standards were established during a hunting dog show.

Our breed is respected among hunters for its hunting abilities as well as its reliability and pleasant temperament and aggression-free behavior towards other dogs. The attendees of the meeting in Hannover displayed the same exact traits! The meeting went far beyond its original intent and produced the first set of by-laws!

There was immediate consensus among the participants that utmost priority was to be given to maintaining the versatile hunting abilities of the breed and to prevent, at all cost, that the breed be divided into a hunting line and a show line. The latter, unfortunately, having been noted as the trend in some countries.

These were the words Dr. Engelmann used more than 100 years ago describing the Dachshund. The words still hold true today as we can see, unfortunately, with some breeds which used to make their living as hunting dogs and have since been reduced to a companion dog with little opportunity to act on their natural and fading instincts.

These steps had become necessary because Deutsch-Langhaar breeders in some countries are not members in the respective breed clubs, but still obtain and issue pedigrees with the FCI stamp affixed for their puppies although neither parent can show proof of any hunting performance or tests.

The representatives of the founding countries met again on February 27th, 2010. The purpose of this meeting was to amend the initial by-laws to accommodate each member country’s national laws and regulations and make the final version of the by-laws ready for their signatures. The tone of the meeting was – again – factual and to the point, and the attendees quickly agreed that the WV-DL should come to life during the 41st Schorlemer HZP in the same year.

Let us take a moment and express our sincere appreciation especially to one person, Wolf Schmidt-Körby, who has so selflessly shared with us his experience and knowledge in forming the WV-Deutsch-Drahthaar. Without his support, the formation of our WV would not have been as smooth and timely.

We admire his strategic thinking and acting as well as his natural social skills.

Germany, Austria, Switzerland, Finland, The Netherlands and Denmark signed the unanimously resolved by-laws at the official formation meeting in the hotel “Angels” in St. Wendel on September 29th, 2010. Numerous Deutsch-Langhaar officials from regional German breed clubs attended the meeting, together with the Mayor of St. Wendel and Werner Horstkötter, the President of JGHV, as honorary guests.

The following board members were elected by open ballot:

We have reported in the past about his merits and services for the hunting dog movement in general and the breed Deutsch-Langhaar in particular.

Johannes Schmidt of Austria was elected Business Manager. He is the breed warden of his national breed club and also the show officer. In the international Langhaar forum, he has won twice the International Utility Test with his dogs in 1997 and 2003. His kennel “vom Wasserplatz” is well-known. To this date, his kennel has produced 23 litters with 186 puppies since 1994. His foundation bitch “Laura von Poppenforst” was a top hunting and test dog (she won the IVGP), and also a dream as a breed bitch. Her stellar performance as a breed bitch was instrumental in the overall Langhaar breeding, at home as well as internationally.

In his speech, Werner Horstkötter congratulated the attending Langhaar officials and friends on their decision to “go global” and called upon a united front by all hunting dog handlers. He commented that on one hand, Europe as a whole is becoming a more united hunting community; on the other hand, however, the non-hunters in our societies have become increasingly critical of our activities. In his opinion, it is our duty to counter this development. A presence reaching beyond regional areas is, in his opinion, crucial to protecting our interests and sustaining our hunting activities as they have been practiced by our fathers and which we desire to preserve for our sons and daughters! The active hunter, without a doubt, firmly believes that responsible breeders, and the appropriate and consistent training of versatile hunting dogs are the foundations of ethical hunting.

Needless to say that the formation ceremony was a friendly and much celebrated event.

JGHV representatives continued their presence into the following days when performance tests were held. Naturally, participating handlers had many questions to ask them. Werner Horstkötter later confided in me that he views the direct interaction with the rank and file as a prerequisite of his post as the JGHV President. An action plan at the top of the organization cannot be realistic without knowing the concerns and issues of hunters with dogs. His dedication and sense of responsibility are evident when he strives to attend as many breed selective tests for the numerous German pointing breeds. For example, this past weekend he attended the “Kleeman” selective breed test in the lower Austrian wine valley. While there, he learned of the concerns of the local dog handlers.

Wolf Schmidt-Körby and the delegates from other countries visited the testing of subjects “Field” and “Water” work. His excellent skills in foreign languages helped international participants with the interpretation and application of the German PO (official testing regulations). The working dogs provided live demonstrations.

Within two weeks from this date, Deutsch-Langhaar friends of the Czech Republic joined the WV DL during the 42nd International VGP in Nuremberg. This completed the requirements, under German laws for official registrations, needed to have the WV-DL registered as an official club. This was an important point as the by-laws stipulate that the association is always headquartered in Germany, regardless of the elected President’s nationality.

Starting with the friendly and respectful tone in pointed negotiations and ultimately resulting in this International Association, the member countries are convinced that they now belong to an organization which can help and support them quickly in practical and theoretical issues.

We have thus provided a future forum in which the Deutsch-Langhaar dog can remain the same strong, persistent and reliable versatile hunting dog as we know it today. And we can preserve these qualities in the traditional “Forest Hunting Dog” for future hunting generations ! 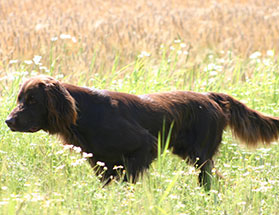